What are the differences between Laser and Sonar technology?

In this post we will explore the main differences between laser and sonar technology. We will go over best use cases for each and review what is the best option for different types of projects.

In underwater inspection, there is a need for sensors that can determine the structure of an asset. Usually represented as a 3D digital point cloud, these measurements are used for engineering calculations, maintenance planning, and ROV localization.

The most prevalent technology in this field is sonar, and high frequency multi-beam sonar systems are capable of capturing complete 3D digital point-cloud representations of underwater environments.

There are however physical limitations to  the resolution capability of these technologies for understanding small yet important features of structures such as cracks and erosion in concrete structures or welds and dents in metallic marine infrastructure.

Underwater laser canners are not affected by the same physical principles as sonar and have the ability to capture details of underwater assets that were previously unobtainable.

What is laser technology?

Also known as LiDAR technology, it uses laser beams to establish the distance between the sensor and the scanned object. The laser travels to the object and reflects back to the source, then the time taken for the laser to reflect back is used to determine the distance.

Any of our laser scanners can be used to create high-resolution images of any object underwater, this is why it is popularly used in seabed mapping and offshore energy infrastructure inspections. Based on the speed of the laser pulses from LiDAR sensors, the data is returned fast and with accurate results, which means you can acquire live data as the laser captures it.

What is sonar technology?

Active sonar ranging is based on emitting a pulse of sound energy to a target surface and measuring the time taken for an echo to return. Based on the speed of sound in water, the distance to the target surface can be calculated. 3D sonar systems assume that the contact point is in the centre of the beam of sound energy when converting the return to a 3D point. Sound energy expands as it propagates through water, however, and a sonar pulse produces returns not only from the centre of the beam but also from any surface in its cone shaped acoustic beam.

The precision of sonar systems is limited because they must approximate a relatively large footprint area with a single point. Details such as cracks that are smaller than the footprint cannot be resolved, and sudden changes in structure such as edges cannot be located more precisely than the size of the footprint.

The ideal application for an underwater laser scanner involves short-range, high-detail measurements of specific locations on an asset. Such applications include damage assessment, archaeological documentation, and as-built documentation including generating 3D CAD models.

There are many projects in which it makes sense to combine both technologies, for example when working on Remote Mine Identification. The sonar can be used for the detection of mine like objects, and the laser for classification and identification.

← Prev: The ENDURANCE has been found! Next: Voyis releases IVER4 AUV Payload with L3Harris → 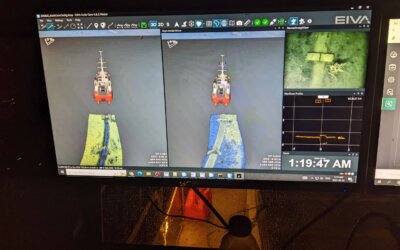 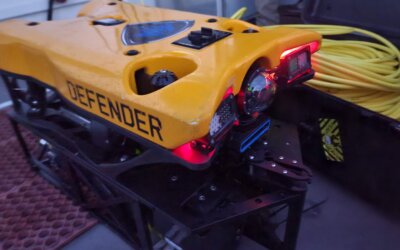